One of my very favorite examples of a musician who uses Social Media well has to be Peter Frampton. Being active on both Twitter and Facebook I feel he does a great job of  being interactive and actively connecting and communicating with his fans, and not just blindly broadcasting outwards like a lot of folks do.

l’ve long been a fan of Mr Frampton. While not around for the early stages of his career I have collected and enjoyed his music for 35 years or so now. From Humble Pie to FCA through some criminally under-appreciated solo albums, I’ve always known him to be a tremendous musician. But through his use of these social networks I have also found that I enjoy his opinions on the music industry, recording, touring, celebrity, and dealing with fans and criticism – all with a great sense of humor.

So with his accessibility I found myself comfortably responding to a tweet of his just a bit ago. I frequently will respond to celebrities that I follow, not because they are celebrities but because I have a response or something to share, as I would with anyone that I interact with via Twitter.  It is after all about that interaction.

But that doesn’t make it any less cool or awesome to have them respond back – as just happened. 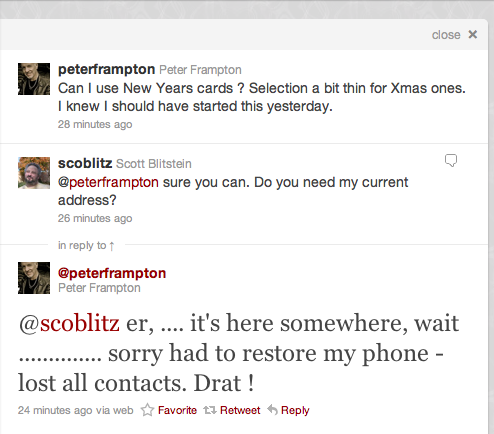 Did you get that? I just had a conversation, albeit virtually and in less than 140 characters with Peter Frampton.

Seriously – how fucking cool is that?

Now I know I risk sounding pathetic and sycophantic with all of this but this isn’t a big deal just because he is famous, it’s a monumentally huge deal because he is, well – he is Peter Frampton.

(ok – just kidding about that part)