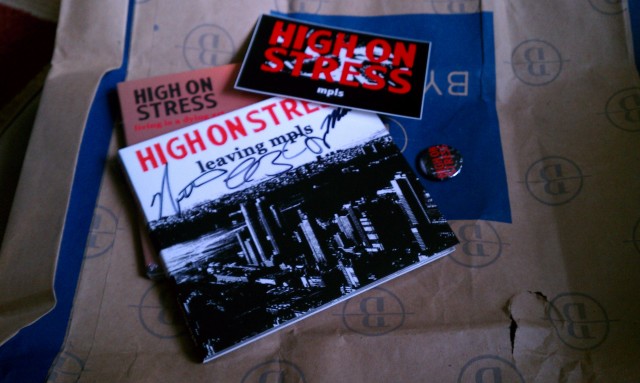 Twitter has been among the most effective means of my finding new music over the last few years. Sometimes it is stuff recommended by others but often I’ll get followed by a band which will lead me to check out their stuff. Such was the case with High on Stress, and with them I really liked what I heard. Hailing from Minneapolis they had a nice Replacements vibe but not in a rip-off sort of way, just a similar swagger. I found their three albums on Rdio and they got put in regular rotation.

Then a few months back they started a Kickstarter to fund the mastering / release of their new record. I kicked in $20 and was glad when they hit their goal. For my money I was to get a signed copy of the new CD plus a download of one of their previous albums. Plus a HoS sticker and a HoS pin. Not a bad deal really and I think a great way to support a really great band.

So the other day I got my stuff and in addition to the download I also got a physical copy of an earlier release.

I’ve since learned that this will be their final album, which is a drag, but I’m glad to have found them and glad I could help make this last release a reality, it’s really quite good.