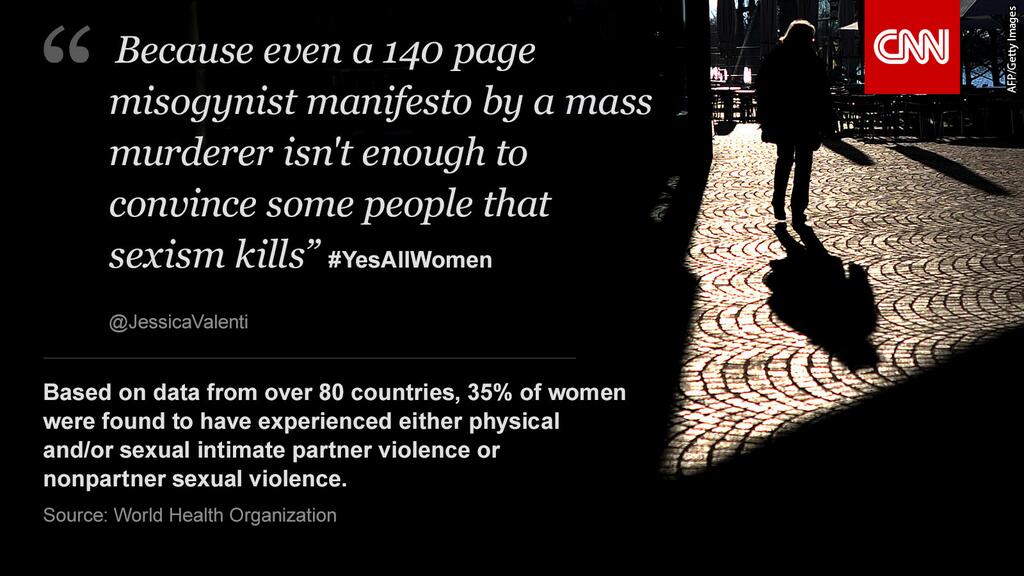 When she goes out walking I know that she sticks to the main streets which are more heavily trafficked. I know that she won’t wear headphones of any sort because it could impair her hearing and thus prevent her from recognizing an oncoming threat. I know she carries a whistle and makes sure she is constantly aware of her surroundings.

I know these things and have known them for years. I know that a lot of women do these things, and much more, on a daily basis to protect themselves. And yet, I never thought about what these things really mean. They mean that she and other women live in constant fear of bad things happening to them, they must be prepared and on guard and vigilent against the very real threat that they will be assaulted or raped.

If you’re on Twitter you probably saw the recent trending hashtag #YesAllWomen in use, and hopefully you clicked through and read the tweets that were using it. If not, do it now. I’ll wait.

The hashtag was started in response to the horrific story of the young man in California who justified his murder spree on his mysognistic beliefs that women deserved to be killed because they didn’t pay him the appropriate attention he deserved by sleeping with him. The hashtag is intented to show that these attitudes aren’t limited to just this incident, they pervade our society and they affect every woman. Yes All Women have to deal with these attitudes.

If you’re a woman you’ll probably identify with the issues and circumstances and stories that others are sharing. If you’re a man your first thought might be to feel attacked, get defensive and say #NotAllMen do these things, I certainly don’t do these things. Before you say that, stop and listen for a second – don’t be that guy. it doesn’t help. #YesAllWomen doesn’t conversely mean that it is all men. It means that these are things that all women have to live with. It’s not an attack and if you think it is, stop for another second and read through things again.

Think about what you’ve read.

We can’t just accept these actions and attitudes as our reality, that’s just wrong. Yes it’s a dangerous place for women I’m not saying that we should pretend that these things don’t happen. But we can’t just throw up our hands and give up. Yes, it is the reality but the reality sucks, it hurts women, it hurts men, it hurts everyone and fuck if we aren’t better than this. I sure hope we are better than this.

Don’t make jokes about rape. Don’t assume that a woman wearing a tank top and shorts wants to be catcalled. No one deserves to be assaulted, no one asks for it, and boys being boys certainly doesn’t mean that they are just going to be rapists and we should be ok with that.

Men have to change. All of us. Actively. It’s not enough to say “I’m not doing…” or “I don’t do these…” We’re still part of the problem. We have to learn to identify these things when they happen around us. We have to learn not to say them ourselves and most of all we have to take a stand and say – “dude, that’s fucked up” when other men say the messed up mysoginistic shit they say.

It’s up to us men to figure this shit out and to change it. Read the tweets and the articles they link to, there are way more examples out there than there should be and if you want to learn, you can. Listen to what women are saying. Read what they are writing. Learn how to be better and change.

I believe that I was raised to treat people respectfully and for that I am grateful to my parents. However, the society we live in doesn’t necessarily do that or reinforce that. I imagine I have been or am still guilty of saying the wrong things even without realizing it. Despite my very best efforts I may have even done it in this post. I like to think that “I’m not doing..” but I need to be more conscious of this, I need to be sure. I want to be better, to learn, and I want to be told if I fuck up so I don’t do it again. This is the right thing to do, the right way to treat people.

All men can change so that not all women will have to live in fear of all men. It starts right now.

2 thoughts on “It Starts Right Now”