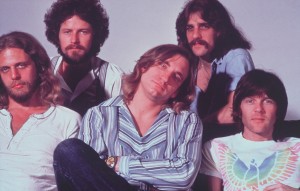 So, the asshole thing in the source article makes this meaner than something I would write but I find this article to be pretty spot on when it comes to the band I love to hate.

Why it sucks: The lyrics are a load of metaphorical bullshit that a freshman English major would be ashamed to write. Then there’s that horrible opening riff. It sounds like the house mariachi band playing for their dinner at your favorite local Mexican spot. All of which leads into the wank off dueling guitar solos. This is a six and a half minute song with zero and a half minutes of listenable music.

Why you suck for liking it: If you liked the Eagles in the ’70s, I can’t totally blame you because there were only three radio stations back then and they probably all played “Hotel California” every 30 minutes for a year straight. But if you like them now, it means you are most likely a dumbshit investment banker who keeps the band’s touring schedule going by renting out $7,000 suites for their shows so you can snack on shrimp cocktail while watching a bunch of old men with long gray hair noodle on their guitars and take three intermissions to get through an hour and a half set.

Read More – I’m not familiar with a few of these but it’s an amusing read in any case.

Honestly, I really don’t mind what other people listen to so much. I mean, if you want to listen to shitty music, feel free. Personally I prefer the non-shitty stuff but whatever.